When the Corona-crisis hit Norway, the country almost ground to a halt. We saw this clearly in pictures of empty streets and in lay-offs. But we also saw it elsewhere. The Earth moved measurably less when we started staying at home and distancing.

By Mathilde B. Sørensen (The University of Bergen) og Steven Gibbons (The Norwegian Geotechnical Institute).

As seismologists, we are interested in how the Earth moves. Our measurements provide important information about where earthquakes, explosions, and other disturbances occur. But we also measure the shaking made by ocean waves, or when people move from place to place: in cars, on trains, and even on foot.

The motions are small, usually only a few nanometers (billionths of a meter!) – but they are recorded clearly on sensitive seismometers. We usually think of this kind of shaking as noise, and we usually want to remove it as best we can, so that we can see the signals we're interested in as clearly as possible.

Monitor in the basement

In Norway, the Norwegian National Seismic Network (www.skjelv.no) monitors the movements of the Earth. The University of Bergen is responsible for a network of stations covering mainland Norway and regions of the Arctic. Some of the stations are placed near the larger cities where the level of noise from human activity is high. One such station is placed in the basement of the Natural Sciences building at the University, in the center of Bergen. Here we see very clearly how the restrictions imposed to prevent the spread of the Corona virus changed the Earth's shaking.

The diagram shows the level of noise recorded on the seismometer in Bergen between February 1, 2020, and April 15, 2020. Times with increased noise levels are seen as peaks in the curve. If you look only at February you see a regular pattern in the noise. There is much more noise during the day than at night, and the daytime noise is much greater on week days than at the weekend. You also see a clear tendency for there to be less noise on Fridays than on the other days of the week. This is seen on many of the stations and is evidence that Norwegians do take a long weekend now and again!

Looking further along in time, we start to see the effect of the Corona-restrictions. Already from the first weekend in March, when the government stopped large gatherings, the noise level was reduced. Later in the week, when schools, Kindergartens, and some businesses were closed, there was a significant reduction in the noise level – both on week days and at weekends. The ground in Bergen simply moved less. 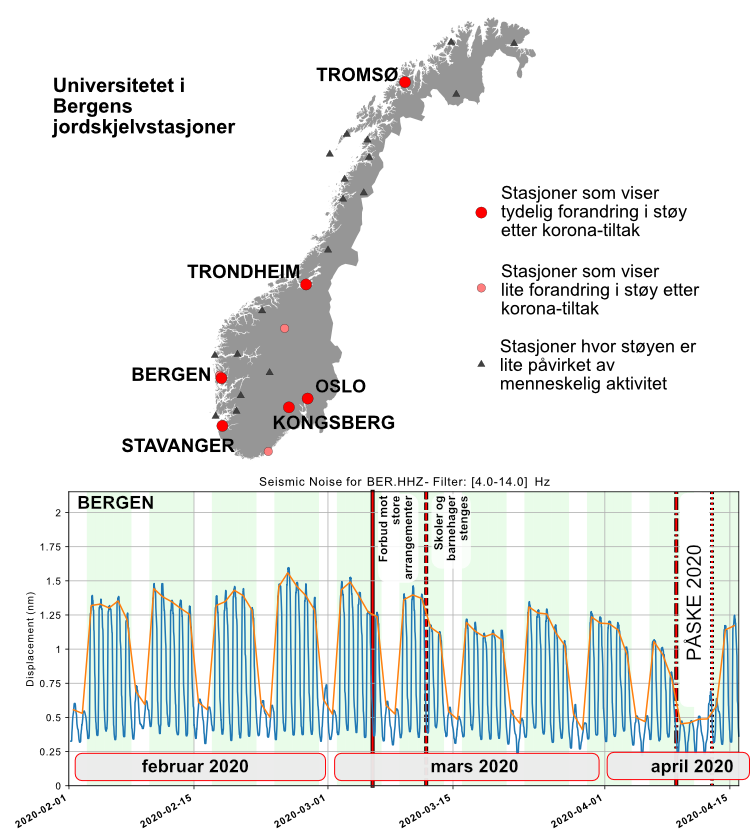 Moving on into April, we also see that Easter was very quiet in Bergen. We see this every year as the people of Bergen travel to their cabins; the ground in the city moves less. It is however interesting to see that even though Easter was spent at home – travel to the cabin was forbidden – there was still less activity in the city than during a normal weekend. Bergen stayed at home!

We have made similar plots for all of the University of Bergen's seismometers on the Norwegian mainland, and the tendency is clear. On all stations near the larger cities, we see a clear change in the noise following the Corona-related restrictions. Most of our stations are placed way out in the country and are little affected by human activity. Here we don't expect to see a change in the noise resulting from the Corona-restrictions. However, nearer the large cities the effect is clear – the Earth shakes less when we stay at home and keep our distance.

Can we use our measurements to monitor whether or not Norwegians are adhering to the Corona-restrictions? In a word, no. The distance between seismic stations is too great to be able to do this, and the structure of the noise is way too complex. Our primary mission is to monitor earthquakes in Norway, both inland and offshore. A better understanding of the background noise will help us to improve our ability to detect signals from earthquakes and rock slides, buried in this noise.

The Corona crisis has mobilized an international collaborative effort to measure the heartbeat of cities around the world, bringing together both professional and amateur seismologists! This heightened focus on how the background noise changes with time will even help us to improve our everyday interpretation and analysis of the Earth's shaking.

This article was first published in Aftenposten Viten 24 April 2020.