The method shows that through modelling advanced landslide physics, both small scale experiments and real tsunami events can be explained with the same model. The results have been published in Nature Communications.

The new model represents the various landslide materials and tsunami in a single model in three-dimensions. A crucial innovation of the model is that it is sufficiently sophisticated to incorporate the mechanics of the landslide, including the porous properties and interaction with water. At the same time, the model is relatively simple as it is described through a limited set of parameters.

The model's ability to capture both porosity, advanced landslide mechanics, and interaction with water, implies that the model parameters do not have to be tuned towards observations when applied to a physical problem, as the model is adaptable to the setting. This represents a large breakthrough, as it implies that predictions can be carried out with much more limited model bias than previously.

Rock avalanches and volcano flank collapses can cause tsunamis with huge run-up heights and devastating consequences. The highest tsunamis that have occurred globally have been caused by rock avalanches, including the over 500 m high wave generated in Lituya Bay in Alaska in 1958. In Norway, three such rock avalanche tsunamis in Loen and Tafjord caused more than 170 fatalities last century. To quantify the hazard posed by such events, it is imperative to have models that are sufficiently advanced to reproduce such events in detail, and to forecast the impact.

The processes involved in the tsunami generation are complex: from rock-slope failure and release, to further breakup of rock as the mass falls, and mixing of the landslide material with water. The landslide further violently displaces the water near its impact, followed by tsunami propagating to more distal locations. Altogether, the landslide dramatically changes properties during the flow and involves a strong coupling with the tsunami. Until now, we have lacked models that account for all of these properties properly and dynamically. There has been a consequent lack of understanding of the tsunami generation process.

In the paper, we present the first set of simulations that consistently describe events from small scale laboratory experiments to a full-scale real world event that took place in 2014 (Lake Askja, Iceland), producing a 80 m high tsunami. As shown in the figures, complex features of both the landslide dynamics and the tsunamis are reproduced in the model. Importantly, unlike in previous models, the simulations are here carried out without any attempt to tune the input parameters. Previous models have lacked the ability to accurately reproduce both landslide and the resulting tsunami at the same time.

It is stressed that the full three-dimensional simulations of the 2014 Lake Askja event require large computational resources. We do not expect such resources to be available for forecasting tsunami hazard in the foreseeable future. Still, the unique experience gained from the studies in this paper allow us to reduce uncertainty and improve confidence in the models used for forecasting tsunami hazard from landslides and rock avalanches. 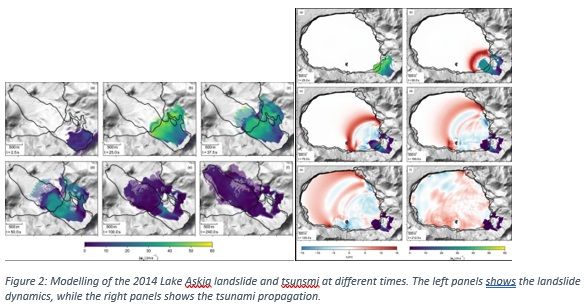 This paper has received funding from the European Union’s Horizon 2020 research and innovation programme SLATE under the Marie Skłodowska-Curie grant agreement No. 721403. The computational results presented have been achieved using the HPC infrastructure LEO of the University of Innsbruck.