Linking art and research to disseminate knowledge on plastic pollution

Every year, 230,000 tonnes of small plastic pellets end up in the ocean. Some of them have been washed ashore at Huk beach in Oslo. Now the plastic has become photo art and a part of NGI’s research – on how plastic pollution changes nature.

To the untrained eye it is just a solitary plastic bottle that looks like plastic pollution, but American photographer Elizabeth Ellenwood knows that she doesn’t need to look far before finding the first piece of plastic.

“I’ve been collecting plastic here in the sand at Huk in Oslo since winter. So far I’ve found nearly 1,000 of these small plastic balls, that are carried on ships and used as a raw material for plastic. Because the pellets are so small and the cargo often isn’t properly secured, ton after ton end up in the ocean. Here they are eaten by fish and seabirds and enter the food chain,” Ellenwood explains.

She grew up by the ocean in Florida and Connecticut in the United States. Her love of the ocean and nature has prompted the photographer to use her camera and photography art to attract attention to plastic pollution.

“When I googled scientists working on the issue, researcher Hans Peter Arp from NGI appeared. So I sent an e-mail,” Ellenwood says.

“I was impressed with Elizabeth’s work and realised that this could be a good partnership,” says NGI researcher Hans Peter Arp. 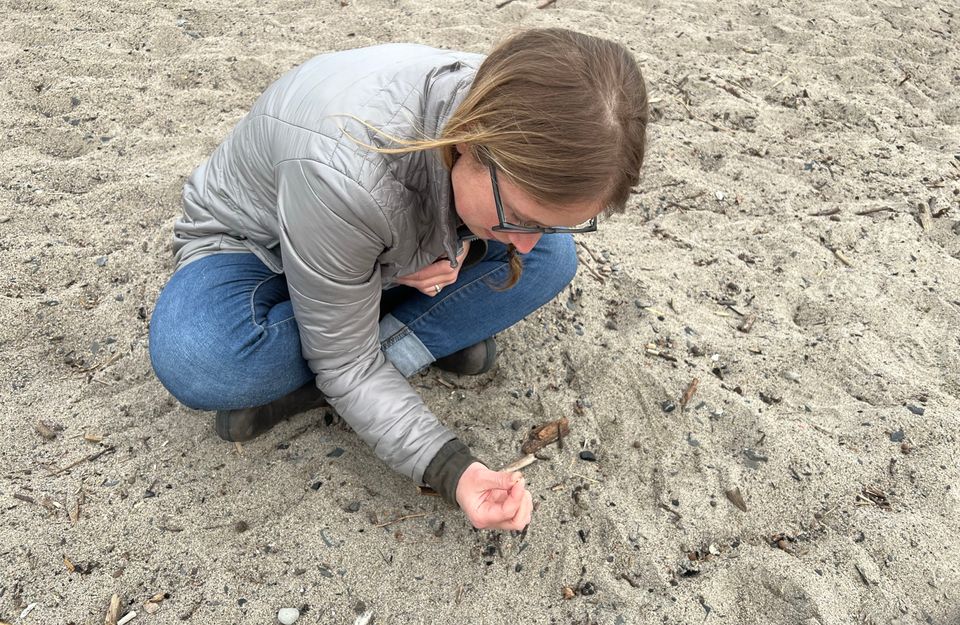 With a Fulbright research grant Elizabeth has used the winter months at NGI, where art and science have been linked.

“I’ve spent many winter hours here in the sand at Huk collecting pieces of plastic, or 'nurdles' as we say in English,” Ellenwood says.

At NGI’s lab, one at a time, the small round pellets – that come in many colours – have been photographed using a microscope. After that, Arp and his colleagues have examined the chemical composition of the plastic.

“What does it mean to us when plastic and nature are linked? This is a big research issue we don’t yet know enough about. This is why we need more knowledge – including on which chemicals that can leach from this plastic and what it may mean for the environment in the ocean and on land in the long term,” Arp says.

The two hope that the link between art and science can open even more eyes to the problem.

“We understand by seeing. By making plastic into beautiful art, I want to invite everyone – across ages and barriers such as language – to understand and learn more about plastic pollution,” Ellenwood says.